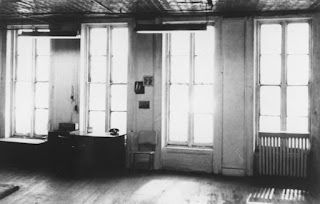 I watched this one on YouTube in about 9 minutes. I'm fairly confident I missed nothing in skipping through it.


An experimental 45 minute film where the camera slowly works its way towards a picture frame.

There is something to be said for that pleasant lonely voyerustic feeling of watching real-life unfold unbeknownst to anyone in the world but you - like people-watching or peering inside of a brightly lit living-room when you're walking past at 10pm on a cold, dark rainy night...

...but I didn't even get that from this film. Perhaps if I had dedicated the full 45 minutes to watching it, I would have gotten more but I see 45 minutes of watching a camera zoom towards a wall as about the most reductive way I could possibly spend my time.

I am generally a fan of experimental film and definitely surreal film but this was probably could have made, more importantly this was a film I could have quite easily lived therefore I do not see the merits of committing it to film, less so including it as one of the 1001 best films ever made.