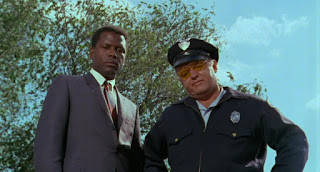 “He's not my favorite actor of all time, by the way. My favourite actor is Mr. Sidney Poitier.”

Like my previous review, this film deals with race relations in America and was ultimately awarded Best Picture at the Oscars, thankfully I am able to report this was a much more effective study of both character and in this instance, area, as we delve into 1960s deep south USA.

Our protagonist, black detective Virgil Tibbs (Poitier) arrives in Sparta, Mississippi and is picked up as a suspected murderer by racist police officer Sam Wood (Oates). Treated with disrespect and mistrust, Tibbs eventually proves both his innocence and his aptitude to police chief Gillespie, played marvellously by Rod Steiger.

Gillespie, like his comrades, is naturally racist and initially doubtful of Homicide Detective Tibbs. We are introduced effectively to the cultural divides that lay across America in this time period. In the North Tibbs is respected and it is suggested that he stay on and try to find the actual murderer.
Poitier and Steiger form a reluctant union and it is one of the more memorable screen duo’s I’ve seen as Poitier’s character does all he can to hold his poise and dignity in the face of bigotry whilst Steiger’s character has to wrestle with his own values.

The crime story is interesting, enough so to hold the interest of the viewer, but it is the encounters that Tibbs faces and the personal journey that Gillespie goes through that makes this story a worth Oscar winner and a film worthy of a place on the 1001 List.

BEST SCENE: Tibbs, tired of being racially abused and treated with disrespect strikes back against plantation owner Eric Endicott when Endicott slaps him. Not only within the film, but globally, this was a statement; that black people will no longer peacefully submit to bigotry. This film came out a couple of years after the death of Malcolm X, a year before the ’68 Mexico Olympic Games ‘black power’ salute. Race relations were at a high in regions in America and in this scene where Tibbs slaps his white suppressor, it sends a clear and direct message.

BEST CHARACTER: Though Tibbs may be the more important character historically, Gillespie’s personal journey is far more interesting. To come to a place where you can reject values you were raised on, that all your friends support and that will leave you wildly unpopular because in your heart you know are wrong takes great courage. The acting performance by Steiger is excellent.

RATING: ★★★☆ – This is a very good film, the detective crime investigation is secondary material to the race issues and therefore doesn’t quite come up to the standard of elite detective films, perhaps being a couple of generations removed from the racial tensions lessens the impact of this film for me personally, though I still have no problems giving it a strong reccomend.