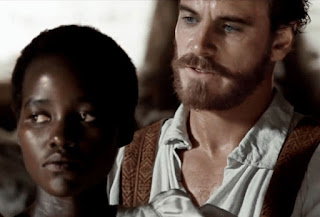 I suppose I better just come out with the controversial opinion right off the bat, I thought this film was really average. Perhaps I had overhyped it myself, I was a huge fan of Steve McQueen’s previous film Shame, the cast was absolutely loaded and it had a boatload of 4 and 5 star critical rave review.

So what went wrong? There was something off about this slave story, perhaps I was burnt on the subject – it’s not exactly an entertaining topic, parts of the film are brutally hard to watch but I don’t think that was it. I have been able to watch far harsher depictions of violence and far grimmer subjects than this and still appreciate the film. This one just fell flat for me.

Let’s focus on the positives first, McQueen, a director I admire, assembled a dynamite cast and the lead performances from Ejiofor, Fassbender and Nyong’o were excellent. For my qualms with their characters, which I will get to, they certainly gave it their all, Nyong’o especially, whose character I was probably most taken with. They were supported by a deep cast featuring Cumberbatch, Woodard, Pitt, Dano & Giamatti.

This felt like a film of contradictions. For a film that was marketed as grisly, realistic and pulls-no-punches, the flashy cinematography seemed out of place for the subject matter. It was the sort of gritty realism that the academy will like, that isn’t really gritty or realistic at all. This did end up winning Best Picture and for me, it’s pure Oscar Bait.

The score, certainly my biggest problem with this film, by Christopher Nolan favourite, Hans Zimmer, was awful and so out of place. It was a slightly altered version of his Inception score (which was absolutely appropriate and full of grandeur) and in this supposed gritty look at Slave America, it felt wholly inappropriate, bordering on ridiculous and every time it would swell would completely take me out of the picture.

The narrative is very basic, I struggled to see the characters as anything other than characterchures; here’s sympathetic slaver, here’s sadistic slaver; there was no wider depth to these men, or at least none that was explored. I would like to have known more about Solomon Northup before he became a slave, he was clearly talented, relatively well-off and well-to-do, seemingly accepted in a society that I would have assumed would have been largely racist and unaccepting of his success. How did he achieve this acceptance? He seemed oblivious to the plight of his fellow Negro, did he have no concern or opinion on slavery? Was he accepting of it or thinking of himself above it? He does not even turn around and acknowledge the existence of the slave who stares admiringly at him in a shop at the beginning of the film. If that reading was explored, he could have reminded me of Andre Braugher’s character in the film Glory, but they are left untouched, perhaps as they would have been seen as a negative portrayal of our protagonist, but at least he would have been a character rather than an attempt shell.

Ultimately I am removed from him and thus struggle to fully get behind his story or gain any more insight than ‘slavery was awful’, which I already knew going into the film.

This film has been compared to, and largely favourably over, Django Unchained which has been derided for being more exploitative and over indulgent. But I question whether McQueen’s effort is any less indulgent or exploitative? Certainly the inappropriate gloss over the film seemed to wrestle with the ‘gritty’ subject matter. It has been widely praised for its historical accuracy on depicting slavery so perhaps I will have to bow to those with greater knowledge and admit my own shortcomings in not ‘getting’ this picture but this is not the type of film that gets me excited about cinema – it had that same gloss as so many other recent historical adaptations that do well come Oscar season – I’m thinking The King’s Speech. Its safe film making. I didn’t get a wider statement on the world, I didn’t get characters I can invest in, I did not have a fun time watching this film.

BEST SCENE: There were two moments in the film where I felt the emotion I think the film was trying to convey throughout, the first when Northup’s wife is separated from her children as they are cruelly auctioned off and then when the sadistic Epps forces Northup to beat Patsey.

BEST CHARACTER: Patsey – Nyong’o’s portrayal of this expert field-hand who is subjected to rape and abuse at the hands of her master and his wife is chilling. I felt her story more than our lead’s, she is sympathetic, she is strong and we truly feel for her plight when she is broken. Whilst McQueen’s focus is on the male characters in his films, here I felt that his female characters were the most sympathetic and most real.

BEST QUOTE: Five hundred pounds ‘a cotton day in, day out. More than any man here. And for that I will be clean; that’s all I ask!

RATING: ★★  – Another Best Picture winner that I ultimately thought was disappointing and overrated. There is clearly some very powerful imagery and gritty realism to this story, but when its main characters are so under developed, I have a hard time buying into it.